Across the business world, there’s an intense debate raging – and an intense battle for your dollar as well. Microsoft and Google, two of the world’s largest tech companies, both would like you to believe their business software suites are the superior one. To any business owner, the choice between using Microsoft 365 vs Google Workspace may seem like an unnecessarily tough one to make, as both suites have similar features – office apps, mail, conferencing – yet each have unique ways of implementing them.

In this article, we’ll take a look at both Microsoft 365 and Google Workspace and each of their big features. We’ll show you the pros and cons of each, so that you can make a better-informed decision on which suite is best for your business’s needs.

Microsoft, with their widely-known and decades old line of office apps, being Word, Excel, Powerpoint and others, definitely have a greater public recognition than Google’s competing Docs, Sheets, and Slides – but does that mean you should count the new guy out?

Both 365 and Workspace are comprehensive in terms of features. From document creation to template implementation to file sharing, both suites will almost never leave you thinking, “I really wish this app could do more.” For the vast majority of business owners, 365 and Workspace alike will provide a complete set of features and functions, so functionality itself isn’t an issue of this debate. So then, when it comes to the core apps of these suites, what all is being debated?

Where & How Do They Run?

There’s a very good chance you’re already familiar with Word, Excel, and Powerpoint. With them having been around since the early days of PCs, they’ve built up quite a reputation, and in many ways, they’re still the same apps they were back then – solid, reliable workhorses that stay out of your way and let you get to work. The biggest difference, of course, being their modern code bases and feature sets.

365’s desktop apps, available starting at their Business Standard and Apps for Business packages, will run natively on any Windows or Mac computer, and functions just like any other traditional app. Open them from your taskbar or Dock, get to work, then close them once you’re done – simple.

This is in contrast to Google Workspace. Having been created by Google, the world’s leader in online and cloud-based tech, Workspace is a highly cloud-centric suite. Instead of having apps sitting on your desktop, Google’s apps live in your web browser. This also means that they were designed to be used while you’re connected to the Internet, and originally, Google’s apps could only be accessed online.

Google has since introduced ways to access their Workspace apps offline, but users won’t be getting the full experience. There are certainly benefits to using a cloud-based suite, but often times, nothing beats a good, old-fashioned native desktop app. Said apps, like 365’s, better harness your computers resources for improved performance, as opposed to funneling everything you do through your web browser first.

Picture this – a higher-up or business partner of yours asks you for a copy of some files for a meeting later today. A text document file, a spreadsheet file, and the file for the presentation you’ll be using – what format, or type of file, do you think they’ll ask for?

Microsoft’s own file formats have been commonplace and the industry standard for decades. .doc has long been the almost-universal standard for any type of traditional text document. Needless to say, 365 will have no issues whatsoever handling these files.

Workspace can handle .doc’s and the like too, however. For simple documents, Workspace can open and edit Microsoft’s formats with few issues.

However, if you’re trying to open a more complex document, like one with templates, watermarking, or a lot of individual assets, Workspace may give you trouble. Misplaced images, strange text wrapping or formatting, missing template elements are just a few compatibility issues that may occur with Workspace and Microsoft formats.

A document’s age may also play a factor. Microsoft has a long history of great compatibility between versions of Word and the like – a Word doc from 1996 will open just as easily in today’s Word as a Word doc from 2021. Workspace, being so new relatively speaking, may run into further issues in cases like these.

Workspace can, however, effortlessly open, edit, and share its own file formats. If compatibility isn’t a top priority, that may well be a point for Google in your book.

365, for how feature-rich it is, can potentially be a bit overwhelming to some newer or less computer-savvy users. While having these apps live on your hard drive is a plus, the long menus, and complicated toolbars and features of Word and the like can be daunting. In this way, there’s a bit of a learning curve to be had with 365 – it may take some getting used to for the less tech-inclined.

Workspace, however, was designed with simplicity and ease-of-use in mind. With an interface as clean as a whistle, and with many features and menus slimmed down and streamlined, it’s a breeze to use – even for those with little computer experience.

Since both Workspace and Microsoft 365 have cloud-based versions, they can be fired up from any type of device via a web browser – be they a mobile one, or one with a non-Microsoft or Apple operating system. While both Google and Microsoft make mobile versions of their suites’ apps, Microsoft 365 has a more feature-rich set of apps for both Android and iOS.

An absolutely integral part of any business’s operations, a good email service is something you can’t go without as a business. Fortunately, both Microsoft’s Outlook and Google ubiquitous Gmail are solid choices of email client – though like their respective office apps, there are key differences between the two.

Gmail is widely known and liked by its user base. With a clean look, easy-to-grasp feature set, and mass adoption, few people will complain about having to use Gmail as their email client. There’s a good chance most, if not all, of your employee base already has some experience with Gmail, and those who don’t won’t have much issue adjusting.

Microsoft’s client, while not as popular, is similarly easy to grasp and intuitive, and more widely accepted in the business community. While it may take some users a bit of time to adjust, Microsoft customers enjoy better email security and more robust sorting capabilities. Just like Microsoft’s office apps, too, Outlook has an email client that lives on a user’s hard drive. It’s feature-rich, snappy, and power-user friendly, but users can use the web-based version just as easily.

Offering up to a gigabyte for free – more than enough for most users – Gmail is still considered rather generous. However, even on their priciest plan, Google offers a maximum of 30GB per Gmail user. Especially if your business deals a lot with large files, many users may find this restricting.

Microsoft offers a similar amount of storage for free, but their plans range from 50GB to 100GB per user.

If you value simplicity and a streamlined experience, Google may be your pick. If you value, sorting and storage capacity, consider Microsoft.

If you’re sick and tired of Zoom, you’ll be happy to know that neither Google nor Microsoft use it – they’ve got their own set of apps to conference with instead.

With Google Meet, you’ll be conferencing using the same cloud-centric approach that the other Workspace suite apps use. While you obviously need internet to video conference, Meet incorporates the same level of integration and cross-app features that you’d expect from such a cloud-centric suite.

Microsoft Teams, while not as streamlined at a glance, is just as easy to use. Available in both a desktop app and a web app, Teams makes it easy for anyone, regardless of tech skill, to join – just click the link, and it’ll sign you on automatically. Meet provides similar functionality, but Microsoft has gone out of their way to make it extremely easy to join a video call – something many of us struggled with during the age of remote work.

If large-scale conferencing is a priority, Teams will give you more bang (or rather, attendees) per buck. Meet allows for up to 500 attendees in its most expensive plan, where Microsoft grants that same number in its second most expensive. If you’re not holding back, with Teams you can enjoy a full 1000 attendees in a single meeting, though it will unfortunately be expensive.

Not to be confused with the aforementioned email storage, cloud storage is like a hard drive in the cloud – a place where you can store and back up all your files.

There’s a surprising amount of variation in how much cloud storage Google and Microsoft provide. At their cheapest price plan, Google offers a (relatively) tiny 30GB of storage per user – an acceptable amount for basic users, but those who deal with large files will find this very insufficient. This figure jumps up to 2TB – almost 67 (!) times more – at their next-highest plan, then to 5TB on their highest.

Microsoft takes an entirely different approach. They offer 1TB per user across the board, for every plan. At their cheapest offering, Microsoft is offering a staggering 34 times more storage than Google per user making Microsoft 365 the easy choice here.

Google is very straightforward in their pricing plans. Ranging from 6 to 18 dollars per user per month, Google keeps it simple for easy consideration. More money per month gives your business greater storage space per user, allows for more conference participants, and at the highest echelons, enhanced security and retention.

Microsoft has a more flexible, albeit potentially confusing payment plan. They offer plans ranging from 6 dollars per month per user, to 22.

More expensive plans offer much better security and peace of mind, with threats like phishing and ransomware being blocked before they can hit your business. Alternatively, Microsoft offers packages that laser-target certain features. For instance, Microsoft offers a package that includes the desktop office apps, but leaves off other, less relevant features.

Both Microsoft 365 vs Google Workspace have their own strengths and shortcomings, and the fact the debate between them is so heated is a testament to how good they both are.

However, when looking at the big picture – the current state of the business world, the needs of the average user, the trajectory of the tech world – our winner of the Google Workspace vs Microsoft 365 debate, is Microsoft.

Native desktop apps, unbeatable file format compatibility, intuitive large-scale conferencing, and a generous cloud storage scheme make Microsoft the natural choice of business software suite. While Google is the current winner in the field of cloud integration and ease of access, Microsoft is quickly closing the gap and offering cloud solutions on par with that of their competitor. 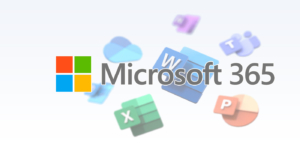